Interim Vice President for Research Julius Fridriksson has made new and early-career faculty a top priority since joining the Office of Research. In his New Faculty Academy presentation, Dr. Fridriksson will deliver an overview of research initiatives at the university, discuss opportunities and challenges related to interdisciplinary research and share information on research resources available to faculty. His presentation will be followed by an open question-and-answer session.

Participants must attend a workshop in its entirety to receive credit for the workshop in their training records. Late arrival and/or early exit from a workshop invalidates receiving credit. If technology issues require rescheduling of a workshop, participants must attend the workshop at the rescheduled time to receive credit. These policies apply to all CTE workshops/events, including workshops that qualify as requirements/electives for a certificate of completion.
Facilitator 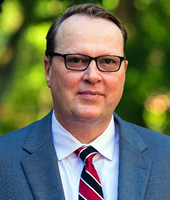 Julius Fridriksson is the newly appointed interim Vice President for Research. Fridriksson has for years been a prominent member of the UofSC research community, serving as a faculty member in the Department of Communication Sciences and Disorders at the Arnold School of Public Health since 2001 and as SmartState Endowed Chair of Memory and Brain Function, directing the SMARTBrain™ Center, since 2016. He also co-directs the cutting-edge UofSC McCausland Center for Brain Imaging. He built his research portfolio from the ground up over many years, studying post-stroke neuroscience and learning about how to manage a growing, thriving team of researchers through doing just that. These efforts have culminated in development of the interdisciplinary Center for the Study of Aphasia Recovery, or C-STAR, now in its second round of successful, competitive funding through the National Institutes of Health. Collaboration is at the heart of C-STAR’s mission. The center encompasses four projects, including two here at UofSC, one at Johns Hopkins University and one at the University of California, Irvine. Each project examines a different aspect of aphasia, a communication disorder characterized by difficulty understanding and/or generating speech that results from damage to the left hemisphere of the brain, often caused by a stroke.